My full, given name is Christopher Cawley.  Most everyone usually just calls me Chris, or "hey you."

I was born and raised in Cooperstown, New York.  I went to Cooperstown Jr/Sr High School and graduated in June of 1992.  Cooperstown is a small village in central New York, and its claim to fame is being the Home of Baseball.  The population during the "off season" is a shade under 3,000 people, but in the summertime, thanks to tourism and baseball, tens of thousands of people crowd the village. 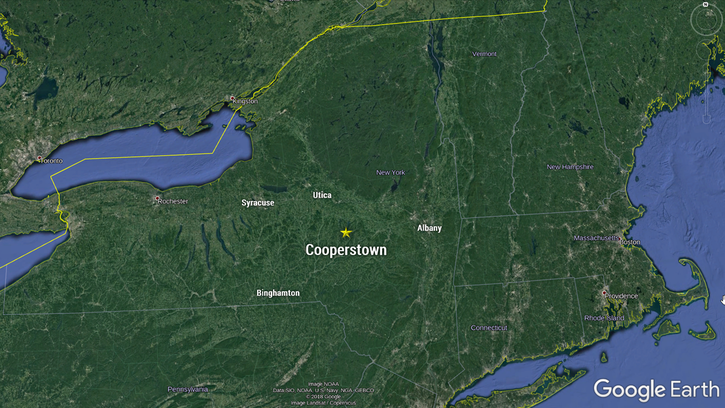 ​After graduating high school, I attended a business college, The Utica School of Commerce, which closed their doors at the end of 2016.  I worked at Bassett Hospital, in Cooperstown, from 1995 to 1999.  I first started out in the Text Processing Department (transcription), not doing medical transcription, but doing regular typing jobs, typing memos, meeting minutes, things along those lines.  In 1996 I was promoted to the Printing Services Department, with the title of Graphics Specialist.  There I did typesetting work, forms, booklets, desktop publishing, as well as helping out with the print shop staff.

My medical transcription career continued with the company eventually known as M*Modal, through November of 2012.  The company underwent many changes and ownership and names over the 12 years I was under their employ.  Eventually I was laid off from that position, as jobs were being sent overseas.  I picked up a transcription job with a small independent called Transcription 24/7, and, with an exception between January and November 2017, I continue working for them on a reduced role as an independent subcontractor.

I married Christine in 1999 -- on tax day!  April 15, 1999.  We met in 1993 while attending the Utica School of Commerce and dated through 1995.  After a "break" (not like Ross and Rachel on "Friends"), we got back together in 1997 and married in 1999.  We then moved to Laurens, New York, a very tiny little hamlet about half an hour southwest of Cooperstown.  Christine also worked for Bassett Hospital -- interestingly enough she was a liaison between the doctors and medical providers, and the outsource transcription company I worked for.

We bought an Italianate Victorian home built in 1880, and ... well ... it was "The Money Pit" in real life.  The house had been empty for several years and had fallen into disrepair, so we essentially "stole" it for pennies on the dollar.  It was fun, honestly, for the first few years but then it just became a drag--physically, emotionally, financially.

Finally in 2005 we had had enough of frozen pipes, $1100 fuel oil bills, snow, cold, and misery of upstate New York, and at the end of December 2005, fled to the city of Whiteville, North Carolina.

I have family in the Whiteville area dating back to the Civil War times; in fact, my great (x3) grandfather fought for the Columbus County 20th Regiment in "The War Between The States."  I spent every summer vacation in Whiteville, so it seemed like a good fit.

In October 2006 we welcomed our son, Nathan, into the world!

I've been a weather geek as far back as I can remember.  I remember watching a little 15-minute show on PBS early each morning called "AM Weather," and I would spend hours upon hours in the evenings watching the old Weather Channel (back when they actually focused on, you know, the weather!).  I became a "Skywatcher" for WKTV-2 in Utica, New York, where each afternoon I would call Meteorologist Rich Lupia and tell him the temperature, what the highs and lows were, etc. (you have to realize this is before the era of Facebook and social media).

The Blizzard of 1993 was the first time I realized that eventually I'd want to do this as a career.  I was living with my mom and stepfather in Hartwick, New York, on top of a place known as Scotch Hill, where God simply didn't mean for people to live in the winter.  Snow up to my chest, tightly compacted by the wind, as well as thunder and lightning... it was an absolutely epic storm.

While Christine and I were living in Laurens, we had the Christmas Day snowstorm of 2002, which was the whitest Christmas I had ever experienced.  We started the day with just a dusting of snow on the ground, but by nightfall the snow was a couple feet deep.  While it wasn't as intense with the wind as the Blizzard of 1993, it was still an amazing snowstorm.

At any rate, we were living in Whiteville, and I was doing my transcription as usual.  One day we had an internet outage so Nathan and I went to lunch.  Shortly after getting back, a thunderstorm rolled through, nothing out of the ordinary, until the Columbus County dispatcher's voice came over the scanner, "multiple reports of a tornado on the ground, Bill Hooks Road and Peacock Road."

We lived on Peacock Road, about 100 yards north of the intersection with Bill Hooks Road.

I grabbed my camera, didn't even put shoes on, and headed out.  I got around the corner onto Bill Hooks Road and saw ......... 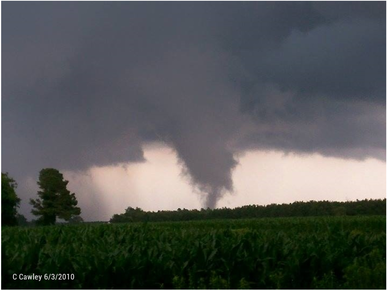 I was able to follow this funnel cloud as it moved east-southeast toward the city of Whiteville before it finally dissipated.

But at that point I made a decision that I wanted to become a meteorologist.  Being a bit "older," and nearly 20 years out of high school, a traditional trek wasn't going to be the route to take.  So I started looking up online schools, and the only school I could find with an online Bachelors Degree in Meteorology was Mississippi State University.  I started the application process, but then discovered I never took the SAT while in high school.  So yes, my old fat self went to Whiteville High School and took the SAT ... only to get scores that wouldn't qualify at Miss. State.  But I *could* get in to Southeastern Community College in Whiteville.

I attended SCC from 2011-2014 and graduated with an Associates in Science, concentrating in Environmental Science.  From there I enrolled at Mississippi State University.

The journey wasn't easy... University-level studies were far more intense than those at the Community College.  But I was able to make good grades right along.  In the summer of 2016 I did an internship at WECT-6, Raycom Media, in Wilmington, N.C.  This was a wonderful and eye-opening experience for me.

A month after my internship ended, my wife Christine suffered a massive heart attack at home the evening of August 2, 2016.  Everything was placed "on hold" during her final 2 weeks -- the details of those two weeks are published elsewhere on this website.

A week after she passed, the Fall 2016 semester was starting at Mississippi State.  I decided not to drop the semester, but to try to press forward, but achieved a nice run of "F" marks, and there went the GPA down the tubes.

But I managed to get it back together and graduated with my Bachelors Degree in August 2017.

I have also worked for a snowmobile enthusiast group based in central New York, writing forecasts for their website, UpstateSnow.com.  I was an assistant forecaster for the winter seasons 2014-15, 2015-16, 2016-17, and served as lead forecaster in 2017-18.

I have also been forecasting independently on my social media page, Facebook.com/MeteorologistChristopherCawley (formerly known as CCSkywatch) since 2010.

I am a SKYWARN area emergency coordinator for Robeson, Bladen, and Columbus Counties in North Carolina, and use amateur radio to communicate with storm spotters to relay severe weather information to the National Weather Service.  I have worked fairly extensively with the NWS Wilmington Office with their SKYWARN program.

Speaking of amateur radio, I got my ham radio license in 2011.  My call sign is KK4CSR and while I have a General Class license, I am active mainly on the local 2-meter repeaters.

While I still work as a medical transcriptionist, I am still actively looking for work in the meteorology business.  I'm certainly not a "standard" applicant as I haven't had green screen time since my internship in 2016, but I feel that, using a conversational style and a little sense of humor, I would be good candidate for any organization.

Some of my other interests include corny/cheesy puns, amateur photography, "dashcamming," the Atlanta Braves baseball team, and music.  I enjoy many different types of music from classical to symphonic metal and just about everything in between (except rap and hip-hop).  I have played piano since I was 6 years old, trying to emulate a boyhood hero of mine, Billy Joel.  I also enjoy the classic rock band Pink Floyd, and symphonic metal with Nightwish.

I am also an unrepentant road geek.  I love studying everything about roads and highways such as the signage, fonts, construction, design, and history.

My son Nathan is currently a Science Nerd, now in 6th grade.  His life revolves around his computer and fire alarms.  He also collects weather alert radios.  Nathan has persevered well after his mother's passing... he's recovering, but he's a remarkably resilient kid.

My work example links can be found on the RESUME page of this site.

Thank you for reading!